“You there, in the second row, sit up straight! Shoulders back!  Don’t slump!”

Thus spake Mrs. Z, titan-ess of fifth grade discipline, who was also known to grab and twist our wattles when she needed to dispatch us to the principal’s office. (We didn’t really have wattles yet; she was obviously working out some envy issues.)

Then there was this, from an otherwise kind-hearted piano tutor: “If the keyboard was a gun, Middle C should shoot you squarely in the belly button. So sit up straight!”

And this, out of the mouths of everyone else from dental assistants to school bus drivers: “If you hunch over, you’re going to grow up crooked / morally corrupt / with charity toward none.”

Youth takes a lot of advice from age on the subject of posture. Which is odd when you think about it, for who knows better by natural inclination how to sit – kids with their shiny new skeletal systems or pinched old Mrs. Z? Even if we tried, we fifth graders couldn’t slouch less gracefully than Mrs. Z in her missionary erectitude.

All the noise we took from our elders on the subject – most of it revolving around the antic notion that we couldn’t be sufficiently creative in our work if our backbones weren’t vertical – would be of merely historical interest if it weren’t for the fact that those words continue to rattle in most of our adult brainpans all these years later. To this day we reflexively believe we’re somehow ethically obligated to sit up straight in our seats. Even now, you’re probably unconsciously auto-aligning some overworked spinal discs simply because the subject has arisen.

Only that way can you write the great American novel…. 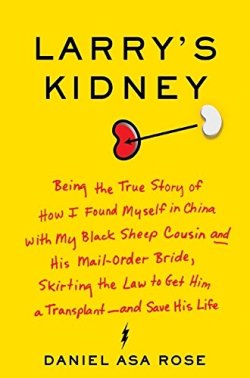 Yes, I’m here to tell you how unlearning those injunctions may actually improve your creativity; in particular your writing. It certainly did mine, beginning a few years ago in backwoods China, where I was on an extended stay to get my cousin a kidney, something I’ve documented in my new book, Larry’s Kidney. My hotel room was so tiny I dubbed it the Super Two. I couldn’t fit into the corner desk. I looked around the room and saw nothing but my queen-sized bed. Could I take my laptop there?

For years I had hauled my laptop with me around the globe, filing travel essays for an Esquire column from Fiji, Finland, Florida. I’d long marveled at how effortlessly I could tote my research and my rough copy with me to any far-flung destination I chose. But I’d never thought to simply hump it across the room, from desk to bed. And so everywhere I went I had been locked into not only the same posture patterns enforced by Mrs. Z, but the same writing patterns she’d emphasized, too. “Subject and verb must agree! Write complete sentences! Chop chop!”

Something miraculous happened when I took my laptop to bed. As I reclined, I found all of Mrs. Z’s quasi-biblical injunctions melting away – not just the ones about how I was supposed to position my body but the ones about my writing habits, too. How I was supposed to finish the first paragraph before I went on to the next. How I shouldn’t let run-on sentences clutter my page. How hyperbole was suspect, humor should be constrained, and a summary graf should wrap things up nicely with a bow. It was as though those archaic writing commands had taken root in my musculature many years ago, along with the postural ones. Threatening to ossify my creative life as well as my carriage.

As I allowed myself to slump – on a delightful continuum from halfway down with the laptop on my lap to flat out with it on my chest[1] – Mrs. Z’s words vanished. Gone were the outworn negative words I’d imbibed before I knew any better. I was not “lazy” to be lying down, nor was I “loafing.” I was not a layabout, a slacker, a slug – amazing how so many of those terms had the ramrod straight letter “l” in them, like a built-in guilt-inducer. In my new asana I resembled something less quantifiable: back angled, knees up, like the “w” in “writer.”

The writing flowed. As my breathing relaxed and deepened, something unlocked inside me. The schoolmistress-y voices of my childhood melted away, replaced by other, more forgiving ones. My mother, tucking me into bed when we both knew I was pretending to be sick on a school day. Early girlfriends, discovering with me the joys of joint horizontality. What a slew of sweeter associations I had in bed than I had at my desk! Writing was not a fifth grade task to be strictly graded by Mrs. Z. It was not about deadlines, nervous tension, cramming, cramping, backache, being blocked – all the things I had connected it with for decades. It was about ease and freedom, lightening up instead of bearing down. It was – wait, was it all right to think this? – not even work at all. It was play.

No wonder so many writers I admired had done their best writing in a recumbent position. James Joyce. Proust. Walker Percy. Edith Wharton. Collette. All those poets. Mark Twain used to lie in bed, dropping pages for his secretary to transcribe. D.H. Lawrence would stretch out beneath trees, scribbling as effortlessly as breathing. Tellingly, Hemingway stood to write, as though at perpetual attention. Maybe that was why Mrs. Z had so over-admired the military brevity of his sentence structure?

Over the next year, I lay around a lot. I came to see that right angles are rare in nature, and that forcing ourselves into not one but two such artificial angles – sitting up with our feet on the floor – was imposing unnatural stresses on ourselves. I realized that recumbency is the instinctual preferred position of the unencumbered: nursery schoolers lying on their bellies to draw, teenagers lying on their backs to take in a rock concert, Romans when they were at their life-enjoying, grape-nibbling best.

Within twelve months, the book was done: written in bed. My previous book had taken me ten upright, uptight years to write (granted, Hiding Places was three books in one: childhood, present-day odyssey, and Holocaust tale) – but this one was done and delivered in a year. And it was a more organic process throughout. Instead of tucking my tummy in and folding my shoulders back, I sprawled, slouched, even snoozed from time to time, bringing the light of my dreams back with me onto the page … and I’d never been more productive.

Maybe applying your butt to a seat works for you. In which case, by all means keep at it. But for those of you tempted to liberate yourselves from the old chair-and-desk, do not let your own Mrs. Z stop you a moment longer. Permit her to rest – she probably wants to anyway. Hush the scolding background soundtrack of your childhood schoolmarms and … slouch. Your wattles, as well as your reading public, may thank you for it.

[1] Always with an inexpensive lap shield attached to the bottom, deflecting heat and potential radiation.

Learn more about Daniel by visiting his website DanielAsaRose.com and his author pages on Amazon and Goodreads.