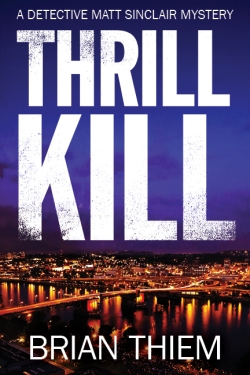 I arrived at the city park just as the sun was rising, the mist still hanging low over the dew-covered grass. A uniformed officer in the parking lot pointed me toward a stand of trees at the back of the park where more patrol officers were clustered. Halfway there, I saw my homicide victim, hanging from a tree with a rope around her neck. One of her legs was suspended from the tree with another length of rope in what looked like a bizarre dance pose. As I got closer, I saw the woman was naked except for a piece of charred cloth stuck to her leg, which I later learned had been soaked in gasoline and lit on fire.

All fiction writers use real life experiences in their novels. It might be as simple as how a man’s voice sounded when overheard in a restaurant or the way a lover’s face looked before a kiss. After working a career with the Oakland police department, much of it in homicide, my experiences are a bit different from those of many writers.

Thrill Kill, the second novel in my Detective Matt Sinclair series, opens with a fictional rendition of the scene I described above, which was a murder I investigated in 1989. That scene is permanently imprinted in my brain. Toward the end of the scene, my fictional detective fights to control his emotions—shock, anger, disgust, compassion. Did I experience similar feelings at that homicide scene years earlier? I don’t recall. Maybe I buried them to better do my job, just as my fictional detective was struggling to do, but when I wrote that passage in my novel inside the close point of view of Matt Sinclair, the emotions felt real.

As I wrote that opening scene in my novel, I set the story aside, tapped into the creative part of my writer’s brain, and created a fictional character with a rich backstory to inhabit the dead woman hanging from the tree. Still in my fictional mode, I got back into the story with the coroner’s deputies arriving and cutting the victim from the tree. My detective sees her face for the first time and my writer’s brain flips a switch.

I’m back in homicide more than twenty years ago. I was called to a motel that catered to drug dealers and hookers on a report of a dead woman in a room. She had no ID on her so I figured it would be twenty-four hours until the coroner could roll her prints and see if she was in the system. A dozen cops were there and canvasing the area for witnesses and information. They were apologetic about being unable to ID her, knowing that would delay my investigation a day. The coroner’s deputies flipped the body and I saw the face. I recognized her as Dawn Campadona, a street hooker I had arrested years earlier when I worked Vice.

I take that memory and fictionalize it so my detective recognizes her, the woman hanging from the tree, as someone he had arrested her years ago. I refer back to my character profile and change her first name to Dawn. All of a sudden, the darkness from the opening scene in the novel has a glimmer of light. Dawn was a pretty girl who had come to Oakland with a dream, only to die a death she didn’t deserve. In the novel, my detective is wondering—just as I possibly was when I saw the real Dawn lying there dead—if he might have done something differently when he arrested her years earlier that would’ve changed her fate. Real memory or fiction? I don’t know.

That is the way my novel takes form, flowing from memories of the past to make-believe—from the real world to fiction—from the familiar to the creative. As a writer, I’m successful when readers accept my make-believe story as something that feels real enough that it could have happened. Drawing on my past experiences and fictionalizing them gives my crime novels a level of authenticity—a sense of realism—that not many other crime writers can do.

You can learn more about Brian Thiem on his website brianthiem.com and his author pages on Amazon and Goodreads.

The first novel in his Detective Matt Sinclair series, Red Line, is available now from Amazon, B&N, and IndieBound.

We’re all creative on different levels. Being creative doesn’t translate to possessing the talent to draw or paint beautiful pictures, it can mean solving complex problems using solutions no one else dreamt possible. Next time you’re about to tell someone you’re not creative: stop. Be patient. You will discover and develop your creative talents over time.

Welcome to ‘Dismaland’: An Anarchy-Infused Theme Park by Banksy – The Atlantic.

Innovation is not some useless corporate jargon. It’s a vital building block of American culture. Without it our business world would be void of character and substance. We would not have cars, planes, computers, or mobile devices. Think about that the next time you plan to insert a form of the word innovation into a press release.

In 2012 while working with my mentor Anne Witkavitch in my pursuit of an MFA in Creative and Professional Writing at WCSU, I wrote a review of Little Bets by Peter Sims, a book I quite enjoyed. Little Bets looks at how creativity is applied successfully in various types of business ventures through creative risk-taking. Anne graciously offered to post my review on her professional consultancy blog – the link is below.

Sometimes, the things that keep me up at night aren’t the monsters and zombies, but rather a subtle fear that comes from dark corners and empty spaces. I didn’t know what to call this kind of fear. I didn’t know where this article was going to take me, but I did know that I was probably going to write about the creepy state of nothing. And I had a few examples. My two favorite examples of creeping me out is The Color Out of Space by H. P. Lovecraft which takes the horror of nothing into a series of gruesome events described as something terrible happening, with no clear purpose. The second example is the dense and complex House of Leaves by Mark Danielewski. This visual adventure is scary, disturbing, and mind twisting. And then it hit me. I had discovered existential horror.

So, what is existential…

Long blogs are the equivalent of an overtime baseball game ending well after midnight. The audience arrived interested in the outcome, but they are tired and ready to move on after the first 500 words. Likewise, readers will disappear quickly as they discover a blog is nothing more than a self-serving meandering stream of thought.

You might have seen the comment “TL;DR” on social media posts regarding a shared blog article. Readers who deem a linked blog much too long to spend their time on, typically more than six minutes, will label it with the kiss of death: “TL;DR” or “Too Long; Don’t Read.” It’s easy to get carried away on a subject, particularly when you are passionate. The good news is you can do it thoughtfully and with brevity.

Spare Us Your Rants

Countless blogs are filled with rants about politics, religion, and product failures among other polarizing topics. People anger easily and feel the need to express their frustrations to the world. Meanwhile, other people are not likely to read an angry rant unless they share the same passion for the same topic. Yes, writing out frustrations can be cathartic to the benefit of one’s mental health, but there are better ways to accomplish this.

When you set out to write your blog know what you want to achieve. What are you paying forward? A successful blog offers insight, advice, information, education, or entertainment – or some mix thereof. You can absolutely gain catharsis in writing a blog that helps another learn from your experiences while releasing your pent-up energy.

If you are a writer your audience may include newcomers looking for writing advice or readers interested in the genre in which you work. A video game fan may be sharing tips and tricks with other like-minded fans. A chef might be writing to someone who searching for cooking methods. It’s not rocket science. Write about your unique expertise or perspective for an audience that is most likely to be receptive to your knowledge. Just don’t make the mistake of telling them what they already know.

You were once educated in your writing language, but you may have allowed some rules to lapse. Grammatical rules exist to keep writing clear and concise. Stumbling across multiple errors in an article is quite discouraging to readers; they strike as unprofessional and sometimes just plain lazy. Do yourself a favor – proofread before you publish. There is no shame in referring to a dictionary or thesaurus when you need, or following a set of guidelines on best grammar practices.

Now that you have established your subject matter, goals, and audience, you need a conclusion that entices your readers to take action. You may want them to share the article, engage in conversation in the comments section, or apply key points in their own lives. You are now bringing your intentions full circle.

So go forth and write well. Keep your blogs short and concise. And share this advice with your friends and network.

HarvestingCreativity.com is looking for creative professionals to share their stories and experiences.

What drives your work? What mistakes have led to your success? How does your creative process flow? How do you get out of bed in the morning and create? What is the craziest story tied to your profession? How do current politics and economics effect your profession?Why do you bother doing what you do? What advice do you have for newcomers to your profession?

I think you get the idea.

I would love to hear from you. Email me your ideas dtgriffith@me.com and let’s tell the world what it means to be a creative.

All rights, credits, and attributions for each submission will be retained by the author. Authors will be listed as contributors to this site. All articles will be promoted equally.

Motivation has been on my mind lately, due in large part to reading Daniel Pink’s Drive, which I recommend everyone to check out. So I’m looking at how it relates to what I do as a writer and how I can write about its existence in a professional setting. And I continue to wrestle with it.

Then I had the brainstorm when fear motivates us. What could possibly be good about a negative motivator? Are there exceptions to the rules of intrinsic and extrinsic motivation? As I felt the need for my bones to rip out of my skin in pondering this, an epiphany struck me – I’m fighting through motivational issues right now as I type these words. Feeling unmotivated to write about motivation. Not good.

Returning to my earlier question about fear motivating us in a positive way – sure, in that no one wants to…

Since the early 1990s, I have occasionally stumbled across the notion that reading fiction is a waste of time. I remember seeing a hair metal rocker in an MTV interview back then proclaiming this frivolous statement. You would think this concept was profound by the attention it was given during the “news” segment. I can’t even recall who the musician was, guess it wasn’t all that big a deal.

More recently, however, Noel Gallagher of Oasis echoed a similar time-wasting sentiment in an interview for GQ’s Icon of the Year. You can see an article about this in The Guardian here. Is it trendy for some celebrities to make this unnecessarily stupid statement? I have yet to see a legitimate reason to defend this point. At best, it promotes his pompous arrogance. It begs the question why GQ deemed Gallagher worthy of such a prestigious title; he’s certainly on track to…